Everyone likes to rag a bit on Facebook… not just because it can be a devourer of time, but because of the inherent dangers that come with social media.  Yet there are definitely positive aspects to checking Facebook daily (as I must admit I do).  Yes, it’s wonderful watching the children of friends who live far away grow up, or see pictures of folks on their much awaited vacations, or get a bit of wisdom or a chuckle from some meme.  But the real gift of Facebook is for all of you teenagers out there who think you are: weirdos, outsiders, nerds, geeks, dorks, ugly, stupid, fat, pimply, unpopular, or just round pegs forcing yourselves to fit square holes.

So, how can social media HELP those who are struggling socially?

I have a bunch of friends on Facebook from high school. Some of them were the styled, beautiful, opposite-sex-magnets… you know, the “popular crowd.”  Some of them were kind of odd misfits who never really fit in anywhere… never seemed to wear the right thing or say the right thing or be invited to the right party.  You know them too.  They’re the “unpopular crowd.”  Most of them grew up floating somewhere in between, like me.  And with Facebook, I get to peek in on what they’re all up to 24 years (gulp!) later.

A lot of those “popular kids” now have amazing careers, look fabulous as they age, and have attractive spouses and healthy, growing children.  And some don’t.

And a lot of those “unpopular kids” now have… ready?… amazing careers, look fabulous as they age, and have attractive spouses and healthy, growing children.  And some don’t.

The gift of Facebook is realizing 24 years after high school, that none of that “who’s in/who’s out” nonsense mattered one little bit once we got out of there.  People I never imagined would be living the lives of their dreams, are.  And people who acted like they owned the world, didn’t necessarily get the keys to the kingdom.

So, if you look around at the “other kids” and wish you were one of them, don’t.  If you are receiving some nasty, disapproving sideways glance from a classmate, ignore it.  If you aren’t invited to that party that gets out of control, be grateful.  If there is some trip to an amusement park, and it’s a big deal who got asked to go, and you didn’t, forget about it.  If someone says something about you on social media, stick up for yourself.  And if you act a little differently, dress a little differently, think a little differently, continue on, my friend!  Be yourself.   Trust this 42 year old.  In 24 years, none of this is going to matter one little bit… and Facebook proved it.

(And, by the way, if you’re one of those kids who has that personality that draws people to you and allows you to affect the actions and attitudes of some of your classmates, lead them with care.  With power comes great responsibility, and you have the power to make someone else’s life a little easier or a little harder.  It’s up to you.)

Thank you, Facebook, for allowing me to follow all of these lives and for reminding me (as I enter the teenage years with my own child) that all of that middle school/high-school angst and worry wasn’t worth it.

It didn’t stop any of us.

If you have a teen who could use this message, please forward it to him/her! 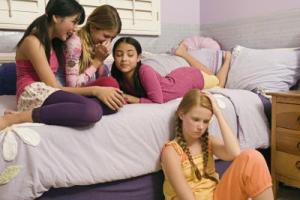 This photo came from an article “How to Manage Mean Teen Girls.”  Check it out here: http://motherhood.modernmom.com/manage-mean-teen-girls-7459.html

3 thoughts on “This Is For All You “Unpopular” Kids (and for the popular ones too!)”